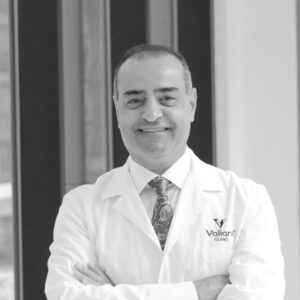 Dr. Rafik Abu Samra is a well-established senior Consultant Cardiac Surgeon with 26 years’ experience in the field of Cardiac Surgery. Dr. Rafik Abu Samra was awarded his MD Doctor of Medicine Diploma in 1993 from the University of Silesia Katowice, Poland. Following his degree in general surgery awarded in 1997 and his degree in cardiac surgery awarded in 2003n, he was awarded a Ph.D. degree in cardiac surgery (minimally Invasive Cardiac surgery including Robotic assisted surgeries), Poland, 2011.

He is comprehensively trained in Robotic surgery collaboration with Medical University in Leipzig in Germany, and he has performed over 1700 surgery Robot Davinci System, Aezop, Zeus.

Dr. Rafik has published more than 6 scientific papers in peer reviewed journals reflecting his extensive academic background which he will continue and strive to help advancing cardiac surgery.

• Member of the Polish Society of Cardio-Thoracic Surgeons

• Member of the European Association for Cardiothoracic Surgery

Scroll to Top
Open chat
24/7 helpline
We use cookies to ensure that we give you the best experience on our website. If you continue to use this site we will assume that you are happy with it.OkPrivacy policy