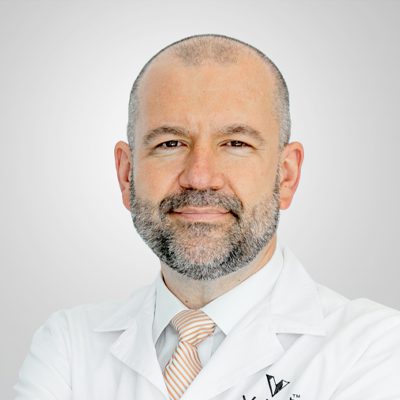 Dr. Zbigniew J. Brodzinski
Consultant Orthopedic Surgeon
Scoliosis is a medical condition, characterized by an abnormal curve of the spine. There are di erent types of scoliosis, depending on the exact location of the abnormal curve and the age of the patient. The abnormal curvature of the spine is the most common symptom of scoliosis.
The spinal curve looks straight when looking from the front. The normal curved of the spine visualized from the sides are known as kyphosis and lordosis. People with scoliosis develop an additional curve in their spine to five it a C-shaped or an S-shaped appearance. Scoliosis can a ect adults as well as children. However, it is most common in patients aged above 10. Additionally, this condition is more common in girls than boys. A sideways curvature of the lumbar vertebrae is also known as lumbar scoliosis.
The most common test used to diagnosed scoliosis is Adam’s Forward Bend Test. During this test, the doctor asks the suspected patient to bend at the waist with palms touching the floor and knees straight. In this position, any abnormality in the curvature of the spine is clearly visible. There are no specific symptoms of scoliosis. The appearance of the abnormal curvature of the spine is most often the first sign of scoliosis. The diagnosis of this condition most commonly takes place during an examination at school and college.
In severe cases of scoliosis, breathing di culty, chest pain, and shortness of breath may appear. Scoliosis is not usually painful. But it can cause neck pain, back pain, abdominal pain, rib pain, and muscle spasms. Below I provide five facts about scoliosis that all parents should know before their child’s next physical.
1. Early diagnosis is key.
It’s important for parents to make sure their children are receiving regular checkups so that conditions like scoliosis can be diagnosed and managed early. If scoliosis can be diagnosed before the child has a growth spurt the provider can determine a treatment plan that prevents a bigger curve from forming during times of growth. Common signs of scoliosis include uneven shoulders or hips, but it is generally, a painless condition that may go unnoticed until a routine exam or physical. Children around the age of 10 to 12 are usually becoming more private and parents are no longer involved in activities like bathing or dressing them, when they may have otherwise noticed a change.
2. Most cases of scoliosis have no known cause
It’s not your fault if your child is diagnosed with scoliosis. Parents tend to ask what they could have done to prevent scoliosis, but scoliosis is a very interesting disease because there is currently no known cause or prevention method. It’s also very common for parents to ask if bad posture or heavy backpacks could have caused their child’s scoliosis. While these two things may be associated with other spine and back conditions, they do not cause scoliosis.
3. Scoliosis runs in families
When parents hear scoliosis runs in families, they often say, ‘But nobody in our family has it, but in reality, it’s likely that someone does or did and it went unnoticed because it was a very mild case. Of course, there are also instances where a child is the first in the family to develop the condition.
4. Only a small percentage of scoliosis patients require treatment.
I see a number of patients who automatically assume they will need treatment for their scoliosis, but only a small percentage — about 30 percent — require bracing, and an even smaller percent — about 10 percent — of patients actually require surgery. If your child is diagnosed with scoliosis, not to be scared. Scoliosis is a very manageable condition when diagnosed early. For children who are still growing, an external torso brace can be used to prevent further worsening of scoliosis while the child grows. Even when wearing a brace, most children live normal lives and participate in the same activities as their peers.
5. Surgery, if needed, has good outcomes
If your child turns out to be among them, I advise parents that while it may be a hard decision to make on behalf of your child, having surgery sooner rather than later is better. When done early, the surgery tends to be simpler, as less of the spine needs to be fused. Perhaps more importantly is your child being in good overall health and having the support of his or her family during recovery. Parents should also work with their child’s school to determine a plan for the time the child will miss during recovery — usually one to two months.